James brings a wealth of hockey experience to his new position. Originally a 1st round (11th overall) selection of the Victoriaville Tigres of the Quebec Major Junior Hockey League, James played 3 ½ seasons with the Moncton Wildcats where he was as an Assistant Captain. During his time in Moncton, he was named Defenseman of the Year and concluded his Major Junior career with the franchise all-time leading points total for defencemen. James also went on to play with Hockey Canada’s Under 18 team before signing with the Montreal Canadiens in 2004.
He played professional for next 11 seasons including with the Hamilton Bulldogs, Milwaukee Admirals, and Chicago Wolves of the American Hockey League. He also spent time in the ECHL with the Utah Grizzlies and the Peoria Rivermen where he was named to the ECHL All-Star game. Upon completion of his playing career, James joined the coaching ranks and most recently served as Head Coach with the Sydney Joneljim Cougars Major Bantam Club for the past three seasons. Former Tiger Pascal Valcourt joined the coaching staff as Assistant Coach for the remainder of the 2020-2021 season.  Valcourt are home this season doing their university studies online.

Valcourt, was a captain and standout forward for the Tigers and is currently a member of the Nipissing University Lakers Men’s Hockey Team. A Saint John Native who’s had a hockey stick in his hand since he was 2 years old, and hung his skates after playing high school hockey. Jordan comes to The Tigers after having spent a number of years in PEI working with the UPEI Panthers. The odd time you can’t find him at the rink, you’ll find him sniping on NHL and Call of Duty on PS4 with his buddies. 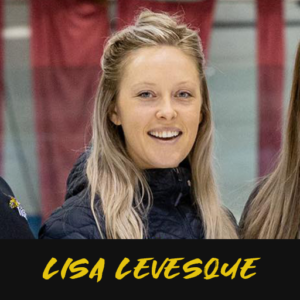 Lisa is as physiotherapist and the owner of Innov-Action Physiotherapy in Campbellton. A local, Lisa is originally from the village of Charlo, just east of Campbellton. She has a bachelor’s degree in kinesiology and a master’s degree in physiotherapy, both from the University of Ottawa. This young woman is passionate about the field of health and physical activity has always been involved in different sports. She has participated twice in the Canada Games in cross-country skiing, and has played several sports including; soccer, badminton, track & field, and dance, and currently also enjoys running and cross fit training. Through her knowledge of biomechanics and anatomy, Lisa prioritizes a comprehensive assessment of body mechanics to determine the cause of the problem. Her focus remains on problem solving rather than solely symptom management. To top things off, she is also a certified personal trainer and sports first responder. Véronic is a young enthusiast of all things sports, competition and nutrition. She has played varsity women’s hockey for the Aigles Bleus of the University of Moncton where she won an Atlantic AUS Championship, and competed at two CIS National Championships. This former hockey player still plays as a hobby, in addition to soccer and working out at the gym. Véronic wants to inspire other young athletes in the region to persevere and work hard to achieve their goals. She is a Registered Massage Therapist and Kinesiologist at the InnovAction Physiotherapy clinic in Campbellton.